This document gives a high-level overview of Melmint: the mechanism that issues and stabilizes Mel, Themelio’s base currency.

Why an endogenous stablecoin?

The most unique thing about Mel is that it is an endogenous stablecoin. That is,

Mel is the first currency to have both properties. But why do we want an endogenous stablecoin in the first place?

First of all, volatile cryptocurrency prices pose a serious problem. The value of a currency going up and down erratically obviously makes it bad as money: it becomes less useful as a store of value or unit of account. More importantly, a volatile unit of account greatly damages the ability to create interesting financial instruments. Nobody is going to sign a 30-year mortgage in Bitcoin without knowing whether Bitcoin will be worth 1, 1,000, or 1,000,000 apples 30 years in the future. This also greatly impacts mechanism design

Unsurprisingly, the DeFi ecosystem relies heavily on fiat-pegged stablecoins like USDC and Dai. But these stablecoins are not what we want: they inherently rely on exogenous trust, in oracles, central issuers, etc. Note that this is a problem even when the stablecoin aims to track a basket of commodities rather than fiat currency — we may lose centralized trust in the Fed, but not trust in oracles. Oracles supplying external information about the commodity market are crucial for the feedback loop of any stablecoin backed by off-chain assets, and they rely heavily on preexisting trust in people or institutions, not endogenous trust guaranteed by protocol incentives. Even “decentralized oracles” don’t cut it: endogenous trust is about incentives, not how many people vote on decisions. Conventional stablecoins, then, cannot be the base currency for a blockchain focused on strict endogenous trust.

Thus, Melmint uses an oracle-free system that doesn’t try to peg Mel to any external asset. Instead, we define a new, trustlessly-measurable value unit, called the DOSC (day of sequential computation), which can be measured on-chain by an autonomous mechanism with full endogenous trust. This, and not dollars or gold, is what the core Melmint mechanism then pegs Mel to.

The one-sentence summary of Melmint’s job is to maintain peg 1 mel to 1 DOSC. But what is a “DOSC”?

The DOSC has two really cool properties that make it a great target for a peg:

But how is this peg maintained? There are two main steps: erg-minting and the central mechanism, summarized in the following picture: 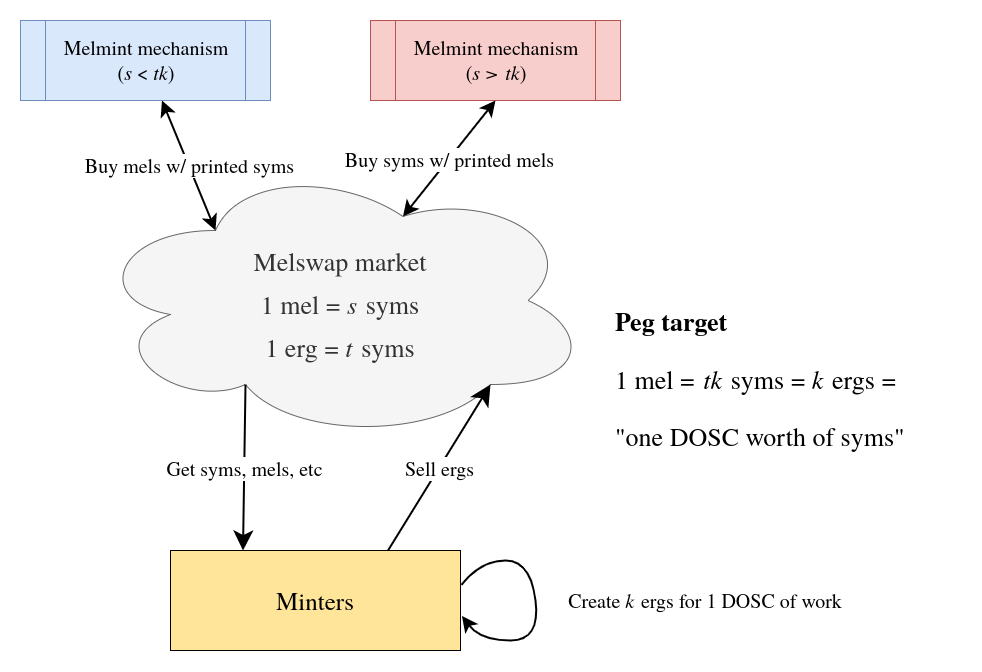 Erg-minting involves allowing anybody to use a special transaction type (DoscMint) to prove that they completed a certain amount of sequential proof-of-work. This transaction then generates $k$ “ergs” for each DOSC of work done. $k$ here is not a constant, but an exponentially increasing conversion factor — while 1 DOSC of work may generate $10$ ergs today, it might generate $100$ ergs a year from now. Due to this rapid inflation, ergs act as an on-chain, tokenized representation of recent sequential work.

The central mechanism uses Melswap, a built-in, Uniswap-like decentralized exchange that supports all Themelio-based tokens. Its objective is to peg 1 mel to 1 DOSC worth of syms, using a feedback loop that prints mels and buys syms or vice-versa. Recall that the Sym is Themelio’s separate, proof-of-stake token. First, we read two exchange rates off of Melswap:

We now take a look at each individual step in this process:

The first step in Melmint is for minters — which can be anybody — to mint ergs, $k$ of which represent a DOSC.

Minters create ergs through a DoscMint transaction, something detailed in the yellow paper.

In summary, the data field of a DoscMint transaction contains two values: a difficulty exponent $z$, as well as a proof $\pi$. This uses MelPoW, a non-interactive proof-of-sequential-work system whose details aren’t important for this document, but in short, $(D,\pi)$ is a proof that roughly $2^z$ nested hashes have been computed on the seed $\chi$, which consists of the first input to the transaction, hashed together with the block hash of the block in which that first input was confirmed.

Now, the DoscMint transaction has proven that the minter did $d$ DOSCs of work. The blockchain needs to award the minter with $k d$ ergs (where $k$ is the erg-DOSC conversion factor) — in Themelio’s coin-based model, this is simply done by allowing imbalance in incoming and outgoing ergs: the transaction’s allowed to produce $k d$ more ergs than it consumed.

Important note: $k$ here is an exponentially increasing conversion factor: $k=1$ at the genesis block, and then $k$ increases by 0.00005% every block. This translates to approximately a 70% annual inflation rate. The purpose of an exponentially increasing $k$ is so that the supply of ergs is dominated by freshly minted ergs — this ensures that the market value of $k$ ergs tracks the 1 DOSC cost of creating those ergs. If $k$ were instead constant, a drop in demand would cause a glut of old ergs that would not sell, where $k$ ergs become worth less than 1 DOSC despite them costing 1 DOSC when they were minted. This would make ergs useless as way of quantifying the value of a DOSC.

Because of the astronomical inflation rate, ergs are not very useful as money. Instead, minters would almost always want to sell their ergs soon for a more value-stable asset.

Themelio conveniently comes with a built-in decentralized exchange, called Melswap, where any Themelio-based token (including custom tokens) can be exchanged for any other. This, of course, includes ergs. Minters can easily take their ergs and exchange them for other tokens, most likely the two main Themelio tokens Sym and Mel.

For example, consider a Melswap market with the following exchange rates:

Thus, to support the peg, every block Melmint will print up some syms to buy up mels, until the peg holds.

Any stablecoin can easily hold a peg when the stablecoin is too expensive — just print more. The true challenge is when the peg must be defended when the market price is below the peg. The stablecoin must in some way be “backed” by another asset, with an independent value, that it can be redeemed for at the pegged value.

Thus, to be stable in a worst-case scenario where everybody wants to sell their mels, the Mel marketcap must stay below the Sym marketcap. Fortunately, as the original Melmint paper shows that’s likely to be the case in any reasonable economic conditions.

For a variety of reasons (say, a general cryptocurrency crash), there might be a scenario where a large amount of Sym or Mel is panic-sold. This threatens the basis of the Melmint peg, and in a case where Mel issuance cannot be backed by the implicit reserve, the peg may no longer be tenable.

The danger here is hyperinflation of Sym, as Melmint desperately prints syms to buy and prop up the value of Mel. Fortunately, this is inherently prevented by the way Melmint works — per the Melmint specification, the amount of syms or mels printed to support the peg is proportional to existing liquidity in the sym/mel market. This means that “how fast” Melmint reacts depends on market conditions. In a panic where market participants anticipate a possible Melmint-driven Sym hyperinflation that will cause both mels and syms to become worthless, liquidity will quickly drain from the mel/sym market as both mel and sym are dumped for alternative assets.

Without mel/sym liquidity, Melmint is effectively turned off. The peg will obviously fail, massively increasing Mel volatility, but a wholesale monetary collapse will be averted, especially because unlike users of USD stablecoins, Mel users never expected zero exchange-rate risk and are unlikely to completely dump the Mel due to a temporary pause of the peg. Once sufficient liquidity returns to the Melswap mel/sym market, the peg will gradually be restored.