In this “yellow paper”, we discuss Themelio’s abstract model of the state of the blockchain. Themelio uses a richly-scripted coin-based model that is different from both the simple coin-based model of Bitcoin and the accounts-and-contracts model of Ethereum.

Throughout this yellow paper, we will be discussing Themelio as a
transaction-based state machine, a conceptual framework introduced by
the creators of Ethereum in their yellow paper. What this means is that a blockchain starts
with a genesis state, which is mutated by transactions over time,
finally ending at the blockchain at its current state.

Transactions,
in this model, are arcs between valid states, and only states that can
be reached by repeatedly applying valid transactions to the genesis
state are valid states in the blockchain. Formally, we can say that

A blockchain, however, does not exactly consist of a linear history of
transactions — transactions are collated into blocks, each of which
can contain a large number of transactions, and possibly auxiliary data.
This collation process then forms a coarse-grained journal of
transactions. A more accurate formalization, then, uses a block-level
state transition function $\Pi$:

where $\Omega$ is the block sealing function that assembles a
final state out of the result of applying all the transactions $T_i$
within block $B$, in addition to a sealing event $F$ which includes per-block actions such as collecting fees.

We believe that treating a blockchain as fundamentally a state machine
is a much more helpful model than simply a series of transactions, even for coin/UTXO-based blockchains like Themelio. Furthermore, Themelio extensively uses explicit on-chain representations of the
current blockchain state, rather than making most of the state implicit
as in Bitcoin.

A note on notation

Thus, for the remainder of the paper, we will use a “hybrid” approach:

We hope this combines the clarity of “pseudocode notation” and the succinctness of mathematical notation.

Let’s first take a look at the basic flow of Themelio’s state transitions. As the following picture illustrates, this is based on two basic datatypes State and SealedState. Both of these datatypes will be described in further detail later. 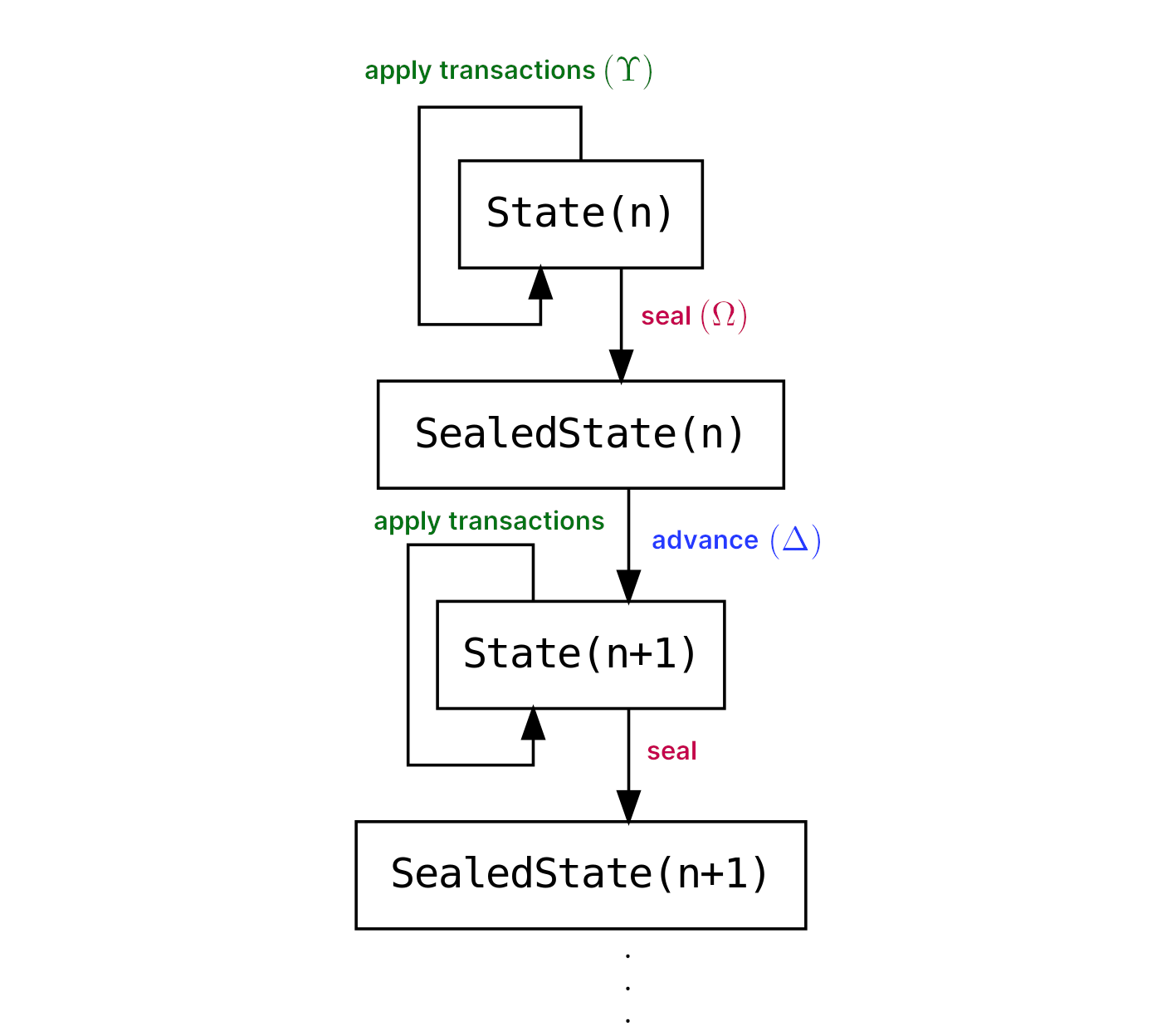 State is the datatype representing the transaction-level state in Themelio. Transactions can be applied to States using the state-transition function $\Upsilon$.

However, transaction-level state transitions cannot create new blocks. With only $\Upsilon$, each State is “stuck” at a particular height; there is no transaction that can force the blockchain to grow to a new height.

When a block is ready, the State is sealed with the block sealing function $\Omega$ to produce a SealedState.

SealedState represents the block-level state in Themelio, and corresponds to a certain block height. It is “sealed” in the sense that no more transactions at that block height can be accepted. SealedStates are the subject of blockchain consensus, and the canonical blockchain state is defined only through a series of SealedStates.

The only operation possible on a SealedState is to advance it, converting it to a State that accepts transactions for the next block.

We now discuss some supporting functions and datatypes that will be recurring in our description of Themelio’s logic:

In particular, we use bincode with:

Key-value mappings in the Themelio state are generally represented as sparse Merkle trees. Sparse Merkle trees use some neat tricks to efficiently encode a Merkle tree with $2^{256}$ elements, which can be used as a mapping from 256-bit keys to values. An important property is that given any SMT of $N$ elements, there is a 256-bit root hash that uniquely identifies the dictionary, and proofs of inclusion and exclusion of size $\Theta(\log N)$ can be produced. Anybody with the root hash can use these proofs to verify that a certain key-value binding either exists or doesn’t exist in the SMT. The specifics can be seen in the autosmt crate of themelio-core.

On this page, a typed SMT between datatypes K and V, SmtMapping<K, V>, is often used. This denotes a SMT mapping between $H(k), k \in K$ and values of type $V$. Given a value $M$ of type SmtMapping<K,V>, we also write

SMTs allow us to commit to large datasets succinctly, and is key to thin-client scalability in Themelio.

The world state, State, is the basic structure that encapsulates all the information needed to validate a single transaction. There is a one-to-one mapping between world states and entire blockchain histories, and other concepts such as the block-level SealedState are derived from State.

State is defined as follows:

We now take a look at its individual elements.

The state always carries a network ID, which identifies whether the state belongs to the canonical “mainnet” (NetID::Mainnet) or a temporary “testnet”. The genesis state has a hardcoded network ID, and this ID can never be changed by any state transition. This makes different network separate at the level of the state-transition function.

The first two elements position the state within the series of blocks that form the blockchain:

The most important component of Themelio’s world state is the coin mapping, State::coins. Each key in this SMT is a CoinID, a structure that uniquely identifies a coin by the hash of the transaction that produced it, as well as an index into its outputs:

For example, CoinID{txhash: foobar, index: 1} identifies the second output of the past transaction with hash foobar.

The basic action of a transaction is to remove coins from State::coins and put newly created coins in.

Note that the world state does not anywhere contain the ordering of the
transactions. This is because transactions within a block are unordered: unlike almost all existing blockchains, there is no
defined order of transactions beyond which block they belong to. As we
will see in, this allows for easy parallelization of transaction processing.

The fee economy state consists of:

These variables interact with Themelio’s fee system, which we will describe in the transaction-level and block-level state transition functions.

The Melmint/Melswap state is used to control the Melmint mechanism that stabilizes the value of each mel. This consists of:

The precise ways these variables are used are discussed in the Melmint/Melswap specification.

The consensus state is used to keep track of the stakers that participate in Themelio’s consensus. For every transaction $T$ that stakes a certain number of syms, it maps $H(T)$ to a value of type StakeDoc:

The fields of StakeDoc have the following significance:

The details of how these values are used will be discussed in the state transition functions.

We now look at the actual structure of blocks and transactions in Themelio, which will also let us discuss the core state-transition functions of $\Upsilon$ (apply), $\Omega$ (seal), and $\Delta$ (advance).

Transaction’s fields have the following meanings:

Applying a transaction to the world state

The algorithm of applying and verifying a transaction against a world state is described as follows. We will discuss ``special'' transactions, the fee economy, and MelScript constraints separately.

No checking is done in this phase; we simply add the outputs into the state. For coins with the denomination of an empty string, we replace the denomination with the hash of the transaction; this is how Themelio implements custom tokens.

Here we handle all the special actions of non-Normal transactions.

We note two peculiar properties of Themelio transactions. First, for
normal transactions where $\Upsilon^S$ is a no-op, it’s clear that for
any set of transactions $T_1,T_n$, we obtain the same final state no
matter in what order we apply the transactions to a starting state.
There may be orders in which the application fails halfway through (for
example, attempting to apply $T_j$ before $T_i$ while $T_j$ spends an
output of $T_j$), but for all valid orders, the result will be the same.
Intuitively, this is because all transactions do is remove and add
coins into the state.

Secondly, for each transaction the order in which $\Upsilon_I$ and
$\Upsilon_O$ is applied does not actually matter. That is, the
transaction can actually add its outputs to the state before spending
its inputs, and this will always behave exactly the same way as the
“natural” order. This is because a transaction can never either directly
or indirectly refer back to its own outputs in its inputs, due to
preimage resistance of the hash function.

These two properties allow us to batch-apply an unordered set of
transactions that may depend on each other — given a set of transactions $T^{+}={T_i}$ and a
starting state $\sigma$, produce
$\sigma' = \Upsilon^+(\sigma, T^+) = \Upsilon(\dots\Upsilon(\Upsilon(\sigma, T_1), T_2), \dots T_n)$
where $(T_1,\dots,T_n)$ is some topological sorting of the transactions
— without actually computing a topological sort at all. This is done by first apply all the outputs, and then applying the inputs and special functions:

We now talk about blocks, and $\Omega$, the “state-sealing” function that builds blocks.

SealedState, representing a canonical state at a certain block height, simply wraps a State and an optional ProposerAction:

SealedState is produced by the state-sealing function $\Omega(\sigma, P)$. The “proposer action” $P$ is an optional non-transaction action that the block proposer uses to pay himself the fees incurred in the block, as well as up/downvoting the fee level. More specifically,

The state-sealing function is thus:

Note that this implies Block is entirely a derived concept for ease of serialization. In this sense, Themelio can be thought of as not really a “blockchain” at all!