In this page, we will fully specify the actual workings of Melmint on the Themelio blockchain. This is in contrast to the whitepaper, which only provides a high-level design.

We call the mechanism Melmint v2 because it has some several important differences with the “paper” Melmint version.

In our original publication, Melmint is divided into two halves: 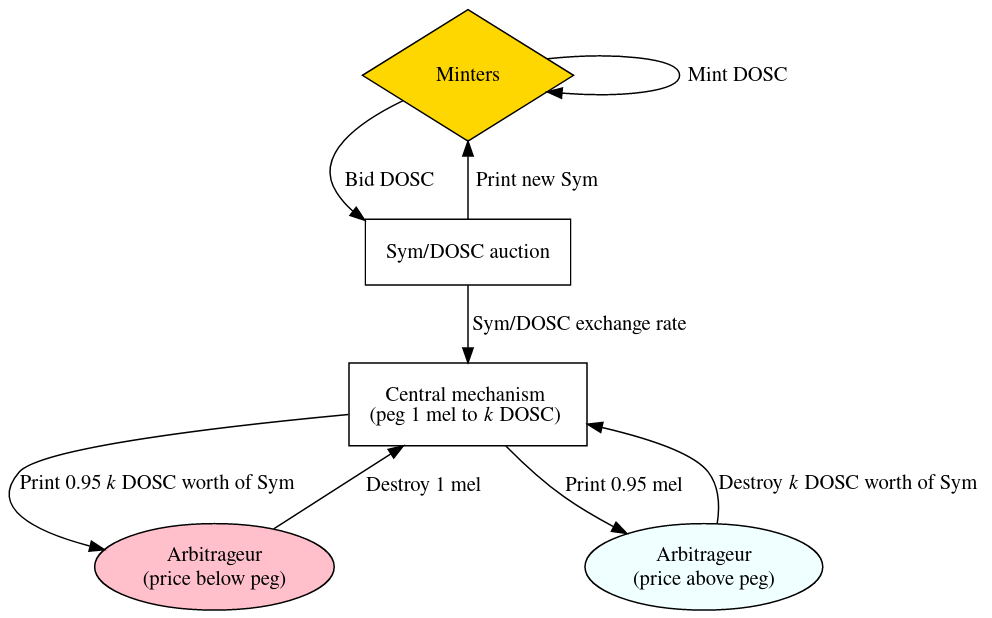 The central idea is that through auctioning off a steady stream of sym for DOSC, we know how much computation a sym is worth. We can then “back” mels with $k$ DOSC worth of newly printed sym.

This way, the “collateral” of a mel is simply the value that can be extracted through diluting syms. Comparisons with existing economies seem to indicate that runs on mels are unlikely because the sym will have significantly higher market cap, but nevertheless “paper Melmint” has a fairly complex system that detects runs and devalues the mel by adjusting $k$ downwards.

Unfortunately, paper Melmint has some significant downsides that make it impractical to implement on Themelio:

Thus, Melmint v2, while keeping the core idea of paper Melmint, completely revamps the specifics of how the mel/DOSC peg is maintained. The auction with a general swapping mechanism, and demurrage is replaced with DOSC inflation.

An overview of Melmint v2

Melmint v2 is based on Melswap, a Uniswap v1-inspired “token swapping” mechanism built into Themelio. All non-mel tokens can be swapped with Mel using Melswap, and a liquidity provider reward mechanism incentivizes participation.

Why not directly target the DOSC/mel pair? Because we can’t let the protocol print DOSCs, lest they no longer become DOSCs. Using the mel/sym pair as the main “lever” for monetary policy allows us to extract “inflation taxes” on sym holders in exactly the same way as paper Melmint does.

In lieu of paper Melmint’s demurrage, we introduce DOSC inflation. We keep track of an exponentially increasing DOSC inflator $\kappa$. The difficulty of creating on-chain ergs is divided by the inflator, so that each erg represents a smaller and smaller amount of real-world computation. At the same time, the targeted erg/mel exchange rate is multiplied by the inflator, so that more and more ergs are needed to obtain one mel. This has the exact same effect as demurraging a fixed DOSC, without requiring erg balances to ever change.

The foundation of Melmint v2 is Melswap, a decentralized exchange built into Themelio that allows free exchange between any two Themelio Denoms. Melswap is an extremely simple Uniswap-like “constant product” automated market maker, and it is based on three concepts: pools, swapping, and liquidity tokens.

We keep a pool that stores liquidity for a particular token and Mel. The transaction level State has a member State::pools of type SmtMapping<PoolKey, PoolState>. A PoolKey is

Note: this strange serialization is for backwards compatibility from before Melswap supported swapping between two non-Mel tokens. TIP-902 added support for non-Mel/non-Mel swapping.

We call the “left” token “lefts” and the right hand token “rights” in our description.

Swapping a involves sending a sum of either lefts or rights into a particular pool, while withdrawing the other token.

We use a transaction with kind Swap. The data field refers to a key in State::pools.

Nothing “special” happens when the transaction is applied to the state, and it is processed exactly like a transaction of type Normal.

This is because to safeguard order-independence of all transactions, the actual execution of all swaps within a block is done on block sealing — in a sense, swaps settle at the next block height rather than immediately. When a block is sealed, we settle all the swaps in the block simultaneously.

This is done by following this procedure:

Note: we always round down. This can lead to minute amounts of tokens “getting lost”, but we never guarantee that tokens cannot get lost anyway (they can be sent to the zero address), so it is always safe to err on the side of tokens getting lost.

Note: we use this all-at-once approach at block sealing to achieve strict order-independence. This also happily gets us a degree of frontrunning resistance.

To reward people for depositing liquidity into a Melswap pool, we use a Uniswap-like liquidity token system. There are two kinds of transactions, LiqDeposit and LiqWithdrawal.

Similar to Swap transactions, they are processed in the “pipeline” just like Normal transactions, and their effects apply on block sealing using coin transmutation. In particular, when sealing a block, after processing swaps:

Melmint is now a simple “central bank” mechanism that supplies liquidity to Melswap to loosely target a given erg/mel exchange rate. This is implemented as the following procedure on block seal, after Melswap is processed:

Why are we so conservative with nudging the target rate? This is largely to prevent small fluctuations or market manipulation from destabilizing Melmint. As long as the market expects Melmint to eventually defend the peg, the market will likely immediately restore deviations from the peg.

We choose this approach rather than trying to use something like a 24-hour TWAP to get a manipulation-proof price feed and taking immediate action because the latter just makes manipulating the TWAP have a huge payoff, since misleading Melmint will cause immediate, catastrophic action.

DOSC minting is also done through coin transmutation. DoscMint transactions must have one output only. A second output will be synthesized in the next block with the appropriate reward.

Why is Melmint v2 better?

Melmint v2’s design is better because:

One notable feature in Melmint v2 is that the mel/sym pool is not directly funded by printing mels/syms out of thin air. Instead, the strength of Melmint’s monetary policy “lever” is decided entirely by market participants’ individual decisions to contribute to the mel/sym liquidity pool.

This is important, because it actually avoids a failure scenario in Melmint v1. In v1, unless an arbitrary depegging threshold is used, a “death spiral” can form where a sudden loss of confidence in the mel causes a run on the mel as people rush to convert them into syms at an above-market price, which then hyperinflates the syms, causing even more loss of confidence in the mel, etc.

In v2, however, such a spiral cannot happen, because when there is a whiff of sym hyperinflation-induced systemic collapse, the immediate response of any rational sym holder would be to remove liquidity from the sym/mel pool to “cash out” as fast as possible. This rapidly disables Melmint’s monetary policy.

Furthermore, each marginal withdrawal marginally weakens Melmint, so there’s much less pressure to be the “first in line” to withdraw.