Note: the “ticker symbols” for mel and sym are, somewhat confusingly, “MEL” and “SYM”. The relationship between “mel” and “MEL” is analogous to that between “ether” and “ETH”.

The mechanics of how mel is stabilized is discussed in the Melmint document. Here we instead largely focus on the mechanisms that accrue value to sym.

Anybody can stake sym. This consists of locking up sym for a fixed amount of time, designating a particular staker that then receives proportionate voting power in the consensus. (A staker corresponds to a “validator” in many other systems)

Stakers sequentially up/downvote a fee multiplier. This is multiplied by the weight of every transaction to determines the minimum fee it must pay, known as the base fee. Any excess fees are called tips.

Base fees are deposited into a global fee pool. Every staker who creates a new block is then entitled to withdraw a small fraction of this fee pool. The effect of this is to divide base fees in a stake-weighted fashion among all the stakers. Tips, on the other hand, are more like traditional blockchain fees and are paid to only the creator of the block.

A good way of thinking about this is that base fees build up a “trust fund” out of which relatively stable “block rewards” are paid. This gives a similar revenue stream as traditional blockchains to stakers, while ensuring that rewards come from fees and not inflation.

When locking up sym, any staker can be designated as the staker that receives , not just oneself. This allows an easy form of stake pooling, but there is a crucial difference with most “delegated PoS” systems — designating a third-party staker requires trusting that staker. If the staker gets slashed as punishment for misbehaviour, everybody who designated stake to that staker will get slashed. It is also up to the staker to distribute rewards it receives to people designating it in their stakes, though by default themelio-node does attempt to return staking rewards to people contributing stake.

As a bootstrap mechanism, we have a small amount of sym inflation in the early years of the protocol that gradually decays to zero, similar to the block reward in Bitcoin.

Unlike in other blockchains, this inflation is not simply paid out as a block reward to the stakers. Instead, it is split between two uses:

The following Sankey diagram summarizes the entire MEL-denominated “block reward” of a staker: 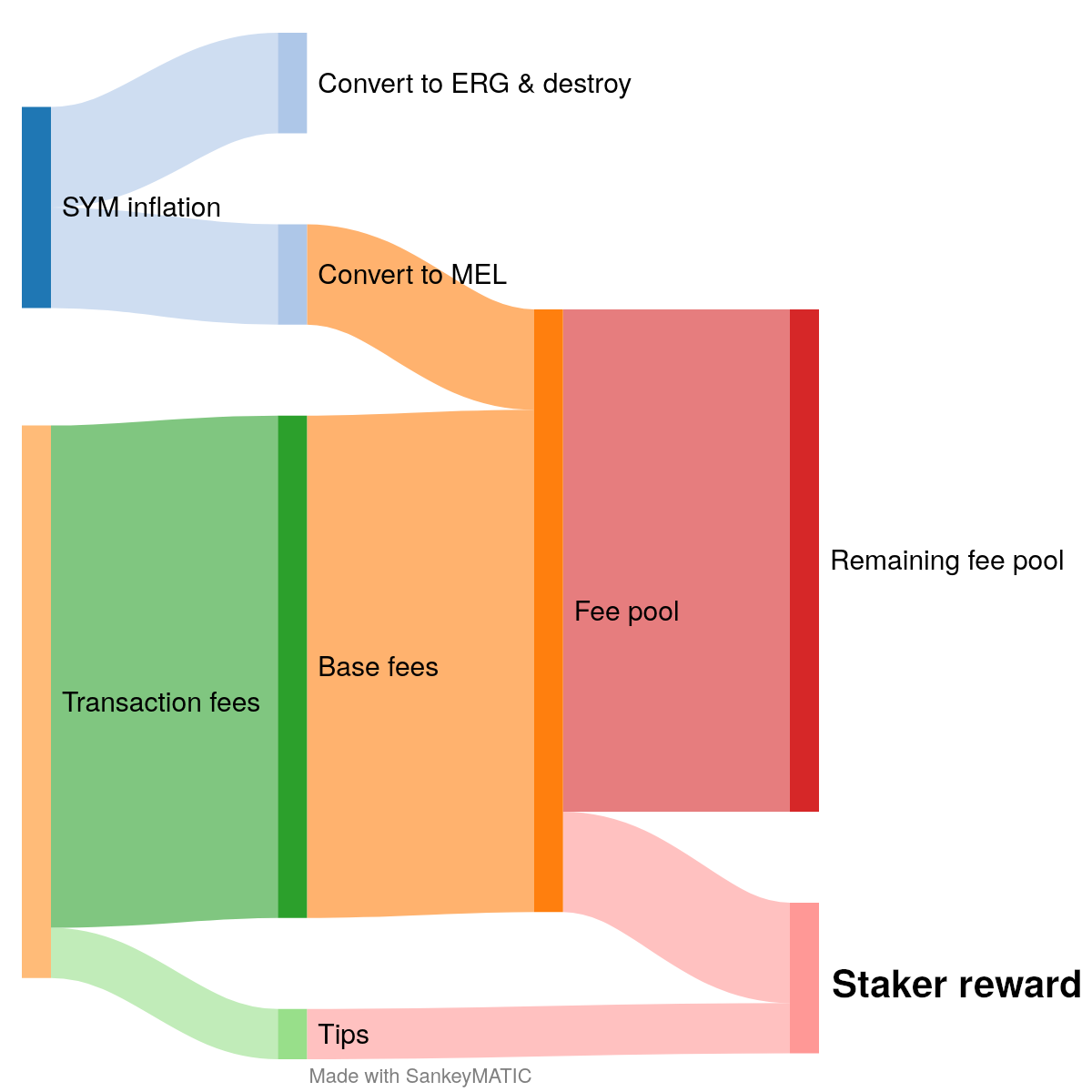 Of course, no “tokenomics” page is complete without a token allocation section. At the time of our planned token launch, we will have an initial supply of 1,048,576 SYM, divided very roughly as follows:

Note: until we make an official token sale announcement, the current token allocation is preliminary and subject to change!

We plan on selling the “general public” portion over a period of time, rather than all at once.

After the initial sale, due to sym inflation the above percentages will decrease. This is illustrated in this animated piechart: